Basic Trigonometric Ratios
and Their Names

To know about the basic trigonometric ratios and their names with respect to a right-angled triangle.

Let us consider the right-angled triangle ABO as shown in the adjacent figure. Now, with respect to the acute angle ∠AOB = θ, the adjacent side OA becomes the hypotenuse and the other (adjacent) side OB becomes the base. So, in this case AB becomes the perpendicular. 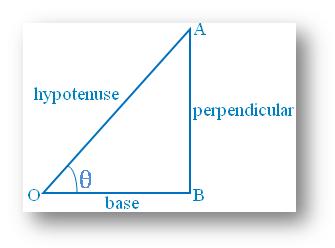 N. B. The side opposite to the angle under reference is to be taken as perpendicular and the side adjacent to it except the hypotenuse as base.

Like all other ratios these ratios are also pure numbers and have no units.

In the beginning of this topic we have become acquainted with the above property. Let us discuss here ore categorically.

● The side opposite to the angle under reference is to be taken as perpendicular and the side adjacent to it except the hypotenuse as base.

● Like all other ratios these ratios are also pure numbers and have no units.

● Each trigonometrical ratio is a real number.

Now we will discuss about the trigonometrical ratios which are always the same for a given angle:

Now take any two points M and N on OA1 and draw MR and NS perpendiculars to OA; again, take any point Q on OA; and draw QP perpendicular to OA1. According to the definition of trigonometrical ratios we get,

Now, from (i), (ii), (iii) and (iv) we understand that the value of sin θ is independent of the size of the triangle from which it is defined provided the angle θ remain the same.

Again similarly we can proof that the values of other trigonometrical ratios (csc θ, cos θ, sec θ, tan θ and cot θ) are also independent of the size of the triangle defining them but depend only on the value of the angle θ.

Let us suppose that ∠AOA1 = θ is formed due to change in position of the rotating ray OA to OA1.

Now, according to the definitions of trigonometncal ratios:

But, as the triangles are similar,

So, we can say, that the value of sin θ always remains the same and does not change for change in the sizes of the triangles or the lengths of their sides.

Similarly, this property can be established in case of cos θ, tan θ, .. etc.

We can conclude that the value of each of the trigonometrical ratios with respect to a particular angle is constant.

From Basic Trigonometric Ratios and their Names to HOME PAGE