Volume is the amount of space enclosed by an object or shape, how much 3-dimensional space (length, height, and width) it occupies. A flat shape like triangle, square and rectangle occupies surface on the plane. When we draw a flat shape on a paper, it occupies a certain area of paper. Solid shapes like cube, cuboid and cylinder occupy space. The amount of space occupied by a solid is called its volume.

Plane figures like triangle, quadrilaterals and circles do not occupy any space because they lie on a plane. But solid figures like those given below do occupy space.

Every object that occupies space has a volume.

The space occupied by any object is called the volume.

So, the volume of an object is the amount of space occupied by the object.

Volume is measured in "cubic units".

Surface like the page of your book, black board, are called plane surfaces. They do not have any volume but have only area.

A cube is a solid whose length, breadth and height are equal. Therefore, a cube, is taken as the unit of solid to measure the amount of space that a solid occupies.

Consider a cube whose length, breadth and height are 1 cm. The volume of this cube is 1 cubic centimetre. It is written as cu cm or. cc. We call a cube with 1 cc volume a unit cube. We always measure volume in cubic units.

For measuring the volume of a solid, we count the number of unit cubes contained by the solid.

Let us see how many cubes are there in the following cuboids. 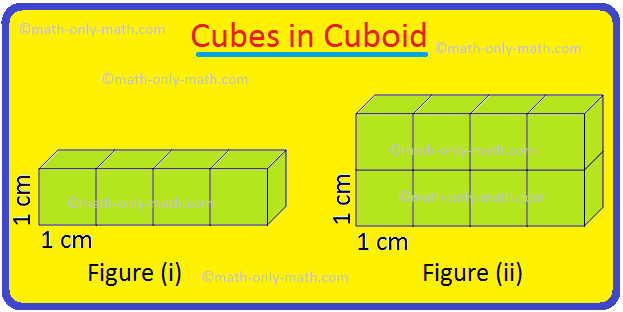 The cuboid in figure (i) is formed by placing 4 cubes in a row. So, the volume of the cuboids is 4 cu cm.

Therefore, the volume of the cuboid = length × breadth × height

From Volume to HOME PAGE