For estimating sums and differences in the number we use the rounded numbers for estimations to its nearest tens, hundred, and thousand.

In many practical calculations, only an approximation is required rather than an exact answer. To do this, numbers are rounded off to a given place value of ten, hundred, thousand ...


Round the numbers to the nearest ten and add.


The estimate differs from the actual by 2.

We can round the numbers either to the nearest ten or the nearest hundred and add to get an estimate.

There are approximately 520 students.


The estimate differs from the actual by 7.

There are approximately 500 students.

The estimate differs from the actual by 13.

To estimate the difference, we round-off each number to the nearest tens and then subtract the rounded-off numbers. 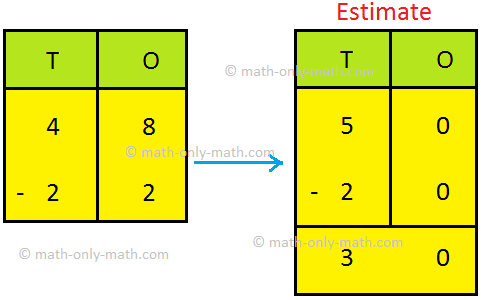 The school library has 284 science books and 268 social sciences books.

Estimate the difference in the number of books.

The difference is approximately 20 books.


The estimate differs from the actual number by 4.

In this case, rounding number to hundreds will not be meaningful as the difference will be 0.

Examples on estimating sums and differences of the numbers:

The rounded numbers are used to estimate.

2. There are 479 girls and 729 boys in a school. Estimate the total number of students in the school.

For estimation the numbers may be taken to the nearest ten or hundred.

[Note: The estimated number is 1210 which is 2 more than the actual number]

[Note: The estimated number is 1200 which is 8 less than the actual number]

3. There are 216 pages in the mathematics book of Class IV and 196 pages in the English book of the same class. Estimate the difference in the number of pages of the two books.

We use the rounded numbers for estimation.

4. Round off the numbers 324 and 777 to the nearest 10s. Find the estimated and actual difference.

Rounding off the numbers to nearest 10s 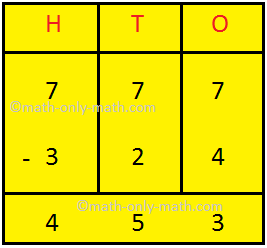 Rounding off the numbers to nearest 100s 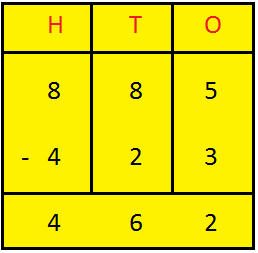 Questions and Answers on Estimating Sums and Differences:

I. Find the estimated and exact difference for each of the given. First one is done for you. 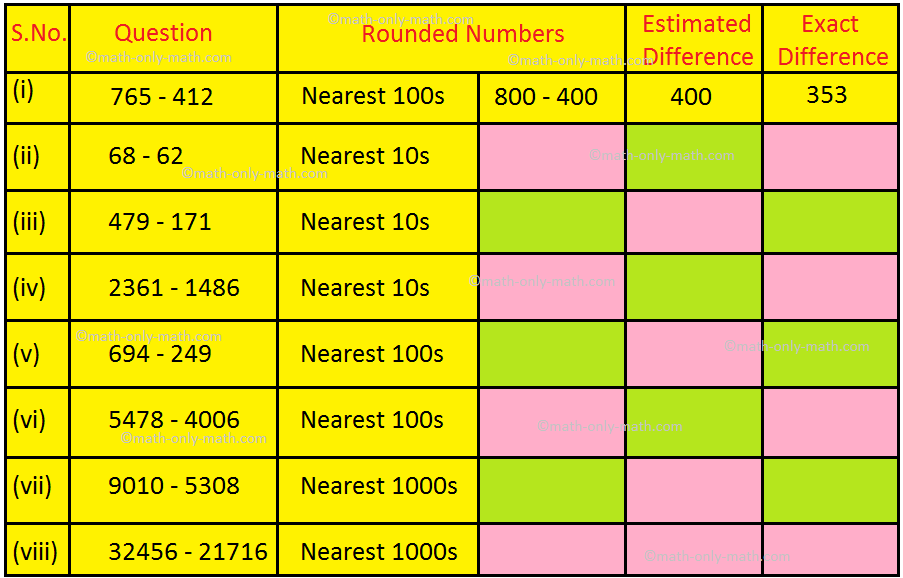 (i) What is the difference between the number of dolls and cars made in a month? Give your answer to nearest 10 and 100.

(ii) If 1600 Super Heroes are sold in the market, then how many are left for sale?

(iii) How many more soft toys should be made in the factory to make the number 7000?

III. Round off the given numbers to the nearest 10s. Find the estimated difference and actual difference.

IV. Round off the given numbers to the nearest 100s. Find the estimated difference and actual difference.

From Estimating Sums and Differences to HOME PAGE