Addition is finding the total of different values.

The important thing to remember when adding is to line up the numbers carefully according to place value.
The numbers which we add are called ADDENDS and the answer of an addition operation is called SUM.

Changing the order of addends does not change the sum.

Adding 0 to a number does not change the number.

How to add the numbers?

Step I: Line up the numbers according to place value add the ONES 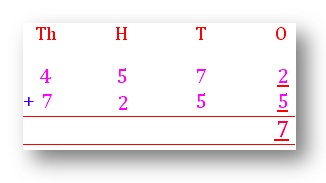 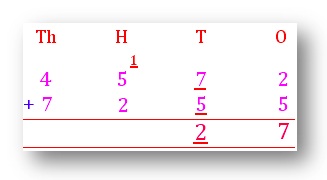 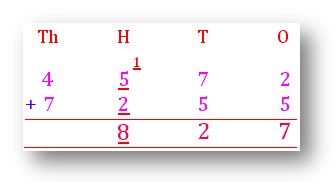 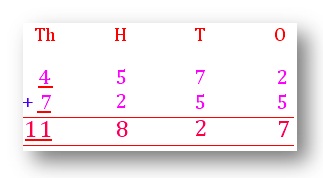 We start from the right and move to the left when we are adding. After adding each place, we need to check. If the sum is 10 more, and then REGROUP.

How to check the answer of an addition sum?

From the sum, subtract the first ADDEND.

The answer of this subtraction will be the second addend.

We can even subtract the second ADDEND from the SUM to get the first ADDEND.

In addition we have already learned to add the numbers having one digit, two digits, three digits and four digits in detail. Now we have to learn the addition of numbers with more than four digits.


Let’s first revise the method of addition for 4-digit numbers or larger numbers.

Note: Addition is done only in the same groupings.

Questions and Answers on Addition:

From Addition to HOME PAGE