The fundamental geometrical concepts depend on three basic concepts — point, line and plane. The terms cannot be precisely defined. However, the meanings of these terms are explained through examples.

● It is the mark of position and has an exact location.


● It has no length, breadth or thickness.


● It is denoted by a dot made by the tip of a sharp pencil.


● It is denoted by capital letter.


● In the given figure P, Q, R represents different points.

● It is a straight path which can be extended indefinitely in both the directions.


● It is shown by two arrowheads in opposite directions.


● It does not have any fixed length.


● It can never be measured.


● Infinite number of points lie on the line.


● Sometimes it is also denoted by small letters of the English alphabet. 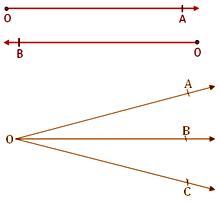 ● It is a straight path which can be extended indefinitely in one direction only and the other end is fixed.


● It has one endpoint called the initial point.


● It cannot be measured.


● A number of rays can be drawn from an initial point O.


● Ray OA and ray OB are different because they are extended in different directions.


● Infinite points lie on the ray.

● It is a straight path which has a definite length.


● It has two endpoints.


● The distance between A and B is called the length of AB.


● Infinite number of points lies on a line segment.


● Two line segments are said to be equal if they have the same length. 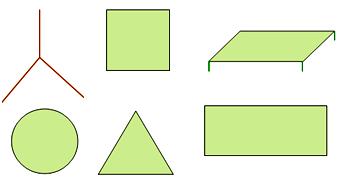 A smooth, flat surface gives us an idea of a plane. The surface of the table, wall, blackboard, etc., is smooth and flat. It extends endlessly in all the directions. It has no length, breadth or thickness. Here, we have shown a portion of a particular plane. We can draw certain figures like square, rectangle, triangle, and circle on the plane. Hence, these figures are also called plane figures.


Incidence Properties of Lines in a Plane:

● An infinite number of many lines can be drawn to pass through a given point in a plane.


Through a given point in a plane, infinitely many lines can be drawn to pass through.

● Two distinct points in a plane determine a unique line.


One and only one line can be drawn to pass through two given points, i.e., two distinct points in a plane. This line lies wholly in the plane.

● Infinite number of points lie on the line in a plane.

● Two lines in a plane either intersect at a point or they are parallel to each other.

Two or more points which lie on the same line in a plane are called collinear points.

● The line is called the line of colinearity.


Points A, B, C are collinear lying on line


Points X, Y, Z are not collinear because all the three points do not lie on a line.
Hence, they are called non-collinear points.

Two lines in a Plane:

Intersecting Lines: Two lines in a plane which cut each other at common point are called intersecting lines and the point is called the point of intersection. In the adjoining figure, lines l and m intersect at point O.

Parallel Lines: Two lines in a plane which do not intersect at any point, i.e., they do not have any point in common are called parallel lines. The distance between the two parallel lines remains the same throughout.

These are the fundamental geometrical concepts explained above using figures.