What are Transversal Line?


In the below figure, line 't' is transversal to lines l and m, intersecting these two lines at points A and B. 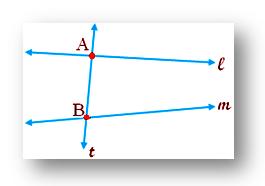 Also, we observe in the below figure, line 't' is not transversal line because it intersects line l and m at one point only. 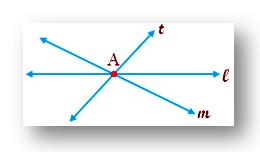 Angles made by the transversal with two lines:

These are pair of angles:


• Which lie on the same side of the transversal.

These are pairs of angles:

• Which lie on opposite sides of transversal.

• They do not form a linear pair. In the given figure, alternate angles are:

Pair of co-interior or conjoined or allied angles:

Results when two parallel lines are cut by the transversal: 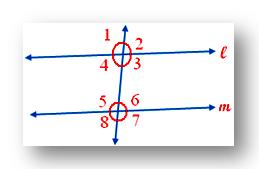 When two lines are cut by a transversal and if

• pairs of corresponding angles are equal


• or pairs of alternate angles are equal


• or interior angles on the same side of transversal are supplementary. Then two lines are said to be parallel to each other.

From Transversal Line to HOME PAGE