Representation of a Fraction

Representation of a fraction is discussed here. In a simple fraction, there is a horizontal line. Above this line we write a number which is called the numerator.

Below this line we write another number which is called the denominator.

Actually, a fraction can be expressed only when we know two facts.

(i) Total number of equal parts, a whole is divided into. This is the denominator.

(ii) Total number of equal parts of the whole being considered. This is the numerator.

For example, 4/7 means that the whole is divided into 7 equal parts. 4 parts of the same is considered. Here, 4 is the numerator and 7 is the denominator.

A fraction means a part of a number.

A fractional number is formed with a whole and its part or parts.

Questions and Answers on Representation of a Fraction:

1. Write the given fractions in words. One is done for you.

2. Give the fraction number for the given fractional names. One is done for you.

3. Write the fraction for the given. One has been done for you.

4. Identity the Numerator and denominator in the given fractions. 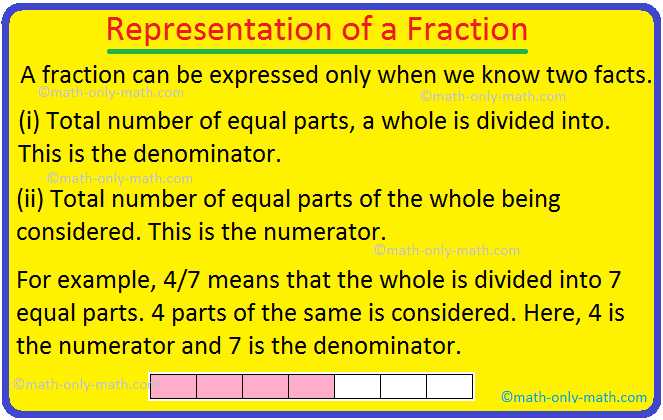 ● Fraction of a Whole Numbers

● Representation of a Fraction

● Comparison of Fractions having the same Numerator

● Conversion of Fractions into Fractions having Same Denominator

● Conversion of a Fraction into its Smallest and Simplest Form

● Addition of Fractions having the Same Denominator

● Subtraction of Fractions having the Same Denominator

● Addition and Subtraction of Fractions on the Fraction Number Line

From Representation of a Fraction to HOME PAGE