The place value chart of the International System is given below:

Whole numbers can be represented on the place-value chart.

We can expand these numbers as:

Let’s read the numbers by observing the place value chart;

We know that in the Indian place-value chart, we move from right to left. Each place-value represents 10 times the place-value to its immediate right. The following place-value chart shows nine places. Starting from the right the nine places are grouped into four periods namely ones, thousands, lakhs and crores. Each period is separated by a comma.

When a period contains zero, we do not name that period in the word form.

Any number raise to the power of zero is 1.

1. Insert commas and express the following numbers in figures.

Starting from left we enter the digits from crores, lakhs, thousands and ones in the following place-value chart.

We enter the digits in the places-value chart starting from right to left.

A place that has zero in the standard form of a number is not represented in its word form.

3. Write the number names for the following numerals.

4. Write the numerals for the following number names:

6. Write the numerals of:

To read large numbers without difficulty, we group the places into periods in the place value chart as shown below.

The first three places (1st, 2nd and 3rd) from the right make the ‘ones’ period.

The next two place (4th and 5th) make the ‘thousands’ period.

The 6th and 7th places from the right make the ‘lakhs’ period.

We put a comma to separate hundreds from thousands and thousands from lakhs.

While reading the numeral all the digits in the same period are read together and the name of the period (except the ones) is read along with them.

The extended form of the place value chart is shown below. This system of reading and writing numbers is known as the INDIAN SYSTEM. 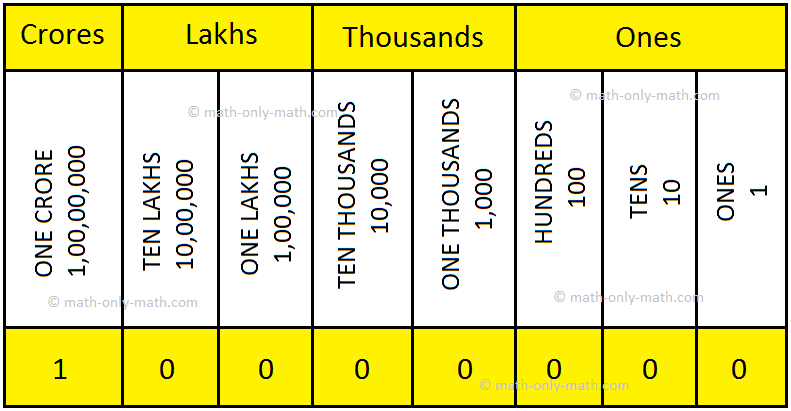 The place value chart given above is known as THE INDIAN PLACE VALUE CHART.

There is yet another form of place value chart which is followed by most of the countries. It is known as THE INTERNATIONAL SYSTEM or BRITISH SYSTEM.

In this system the digits in a number are separated into groups of three called periods.

The first period from the right is called ‘ones’ period, the next period is called ‘thousands’ period and the third period is called the ‘millions’ period. In this system also, all the digits in the same period are read together and the name of the period (except the ones) is read along with them.

The place value chart given below is known as THE INTERNATIONAL PLACE VALUE CHART. 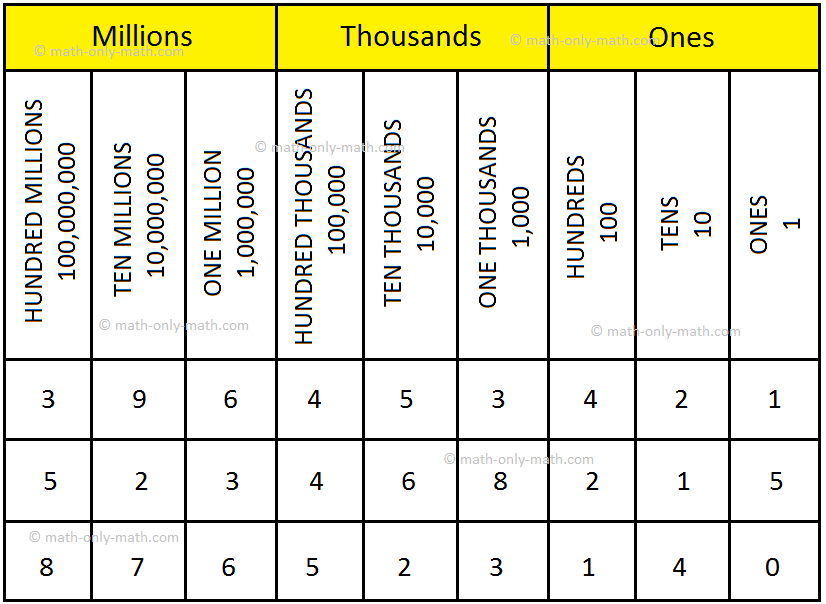