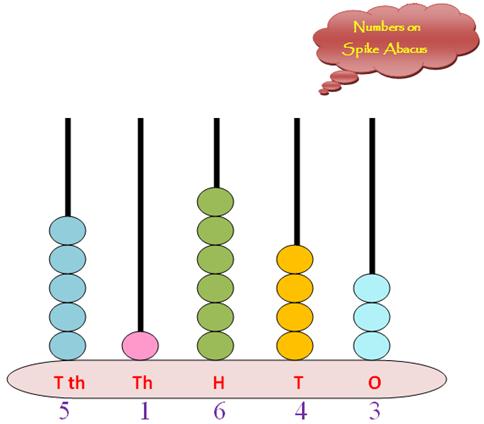 From the above abacus we can count the beads from right to left and then write the exact number i.e., 51643.

Representation of Numbers on the Abacus:

We can show 1000 on an abacus with four vertical rods. The rods represent place value of thousands, hundreds, tens and ones. We add beads on the rods to show different numbers. Each rod can hold up to 9 beads.

Representing 5-Digit and 6-Digit Numbers on the Abacus:

Let us represent the 5-digit and 6-digit numbers on the abacus.

● Finding Out the Numbers


● Names of the Numbers.

● Expanded form of a Number.


● Example on Comparison of Numbers.


● Successor and Predecessor of a Whole Number.


● Formation of Numbers with the Given Digits.

● Formation of Greatest and Smallest Numbers.

● Examples on the Formation of Greatest and the Smallest Number.

From Numbers Showing on Spike Abacus to HOME PAGE