Rounding off numbers are discussed here, where we need to round a number. Rounding can be done for every place value of a number.

Rounding off a number makes it easier to estimate the answer in our daily life. It is also an easy way to check calculations mentally. Look at the number line below and observe how rounding of a number can be done using the number-line.

Round off a Number to the Nearest Tens:

(When any number is situated half way or in the middle of two convenient whole numbers, it is rounded up to the higher whole number)

Round off a Number to the Nearest Hundreds:

Round off Number to the Nearest Thousands

Questions and Answers on Rounding off Numbers:

I. Round off the following numbers to nearest tens:

II. Round off the following numbers to nearest hundreds:

III. Round off the following numbers to nearest thousands: 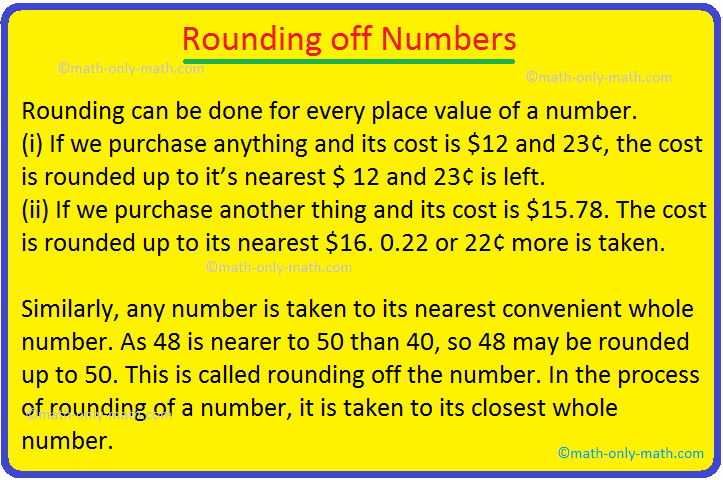 IV. Using number line, round off following numbers to the nearest tens:

V. Round the given numbers to the nearest tens:


● Finding Out the Numbers


● Names of the Numbers.

● Expanded form of a Number.


● Example on Comparison of Numbers.


● Successor and Predecessor of a Whole Number.


● Formation of Numbers with the Given Digits.

● Formation of Greatest and Smallest Numbers.

● Examples on the Formation of Greatest and the Smallest Number.

From Rounding off Numbers to HOME PAGE