How to read and write roman numerals?

Hundreds of year ago, the Romans had a system of numbers which had only seven symbols. Each symbol had a different value and there was no symbol for 0.

The symbol of Roman Numerals and their values are:

For reading and writing numbers upto 50 we need only the first 4 symbols.

The numerals used in the present number system (decimal system) are

These numerals were invented by Indians and later through the Arabs reached Europe. Hence this number system is termed as Hindu-Arabic Number System.

Early Romans developed a system of numerals. They are called Roman numerals. These are also commonly used in day-to-day life.

The following table shows the Roman numerals and their corresponding values.

Value of the symbol in Hindu-Arabic numbers.

This is not a place value system.

They are got by the method of addition or subtraction.

Rules for the first five symbols

When a symbol is repeated in succession, we multiply the value of the numeral by the number of times it is repeated.


A symbol cannot be repeated more than three times in succession.

i.e., The symbol I, X, C and M can be repeated in succession up to 3 times only in writing a number.

We cannot write 40 as XXXX.


The symbol cannot be repeated more than three times.

Writing a smaller number to the right of a larger number means the numbers have to be added.

i.e., If a symbol is written to the right of a greater number, we add its value to the value of the symbol on the left.

i.e., If a symbol is written to the left of a greater number, we subtract its value from the value of the symbol on the right.


The symbol V cannot be repeated or subtracted.


We do not subtract 5 from any symbol. VX is not correct.

4. The symbol V,L and D are not repeated to form a bigger number.

5. While writing Roman numbers first write the largest numeral. Then put smaller numerals to the right (for addition) or left (for subtraction)

The following table gives the Roman numerals corresponding to the Hindu-Arabic numerals.

A list of Roman Numerals and their value are given below: 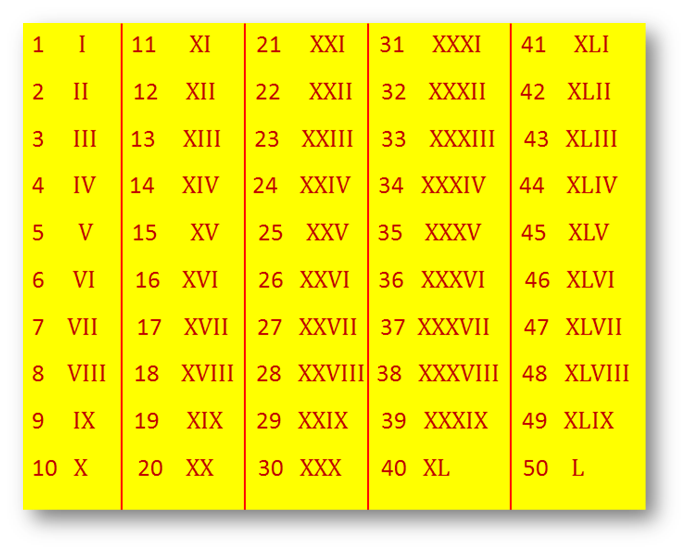 1. Write the Roman Numerals for 27. Break up the number into Tens and Ones.

2. Write the Roman numeral number for 43.


Roman Numerals for 43 is XLIII.

We cannot write 45 as VL, because V is never subtracted.

Note: V, L and D do not precede any bigger digit.


Hindu –Arabic numeral for XXIV is 24.


In this example no subtraction is needed.

Questions and Answers on Roman Numerals:

I. Write the corresponding Roman numerals.

III. Write whether the following are true or false.

V. Which of the following are meaningless?

● Rules for Formation of Roman-numerals

From Roman Numerals to Home page