Step I: Convert the fraction into an equivalent fraction with denominator 10 or 100 or 1000 if it is not so.

● To convert a fraction having 10 in the denominator, we put the decimal point one place left of the first digit in the numerator.

● To convert a fraction having 100 in the denominator, we put the decimal point two places left of the first digit in the numerator.

● To convert a fraction having 1000 in the denominator, we put the decimal point three places left of the first digit in the numerator.

The problem will help us to understand how to convert fraction into decimal.

Let us check the division of decimal by showing a complete step by step decimal divide.

We know that when the number obtained by dividing by the denominator is the decimal form of the fraction.

There can be two situations in converting fractions to decimals:

• When division stops after a certain number of steps as the remainder becomes zero.

• When division continues as there is a remainder after every step.

Here, we will discuss when the division is complete.

Explanation on the method using a step-by-step example:

• Divide the numerator by denominator and complete the division.

• If a non-zero remainder is left, then put the decimal point in the dividend and the quotient.

• Divide as in case of whole number by repeating the above process until the remainder becomes zero.

2. Express each of the following as decimals.

(Making the denominator 10 or higher power of 10)

Conversion of fractions into decimals when denominator cannot be converted to 10 or higher power of 10 will be done in division of decimals. 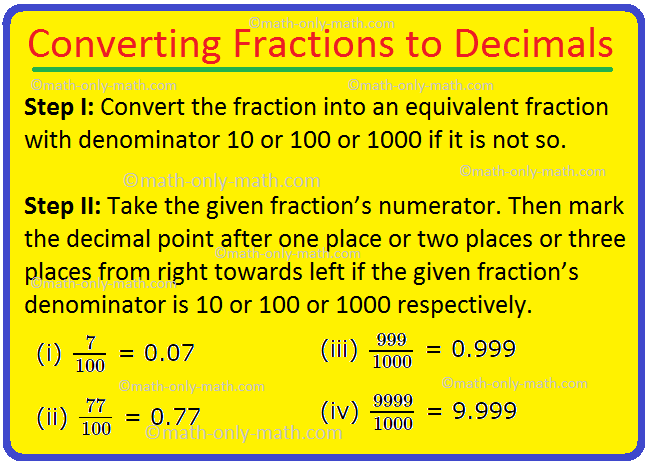 Examples on Conversion of Fractions into Decimal Numbers:

Express the following fractions as decimals:

Using the above method, we have

● Rounding Decimals to the Nearest Tenths

● Rounding Decimals to the Nearest Hundredths

● Multiplying Decimal by a Decimal Number

● Multiplying Decimal by a Whole Number

● Dividing Decimal by a Whole Number

● Dividing Decimal by a Decimal Number

From Converting Fractions to Decimals to HOME PAGE