(i) Ken’s new neighbor asked him his age. Ken said that he was fourteen years old.

In all this these statements, the numbers have been rounded. A rounded number is easy to remember and is a convenient figure for calculation.

While rounding numbers, the number 10 is very useful. We use it to think about place value. The number 5 is also important.

These number lines show the halfway point between two numbers.

Label the number liner to show the halfway point between each pair of numbers. 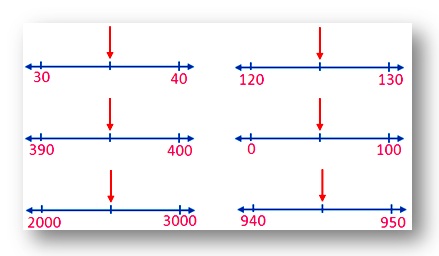 Look at the folded number line.

Each peak shows a number ending in 5. These numbers are halfway between the two tens.

The tens are the base of each fold in the valleys.

Halfway number such as 5 and 15 are rounded to the higher ten.

Numbers can be rounded to the nearest hundred, thousand, ten thousand and so on.

The halfway numbers on all the number lines contain a 5. The place of the digit 5 varies.

How do you round numbers?

Here we will discuss how to round numbers.

Color the digit in the tens place 446

Look at the digit to the right of the colored digit. If it is greater than or equal to 5 then round up. If it less than 5 then round down.

Colored the digit in the hundreds place 726

The above method is convenient and helps us to remember very large numbers easily. It also simplifies calculation of large numbers.

Round off to Nearest 10.

Correct to One Decimal Place.

Worksheet on Rounding off number.

From Rounding Numbers to HOME PAGE