Worksheet on Word Problems on H.C.F. and L.C.M.

I. Find the highest common factor and least common multiple of the following pairs of numbers:

(iii) Find the least length of a rope which can be cut into whole number of pieces of lengths 45 cm, 75 cm and 81 cm.

(vi) 210 oranges, 252 apples and 294 pears are equally packed in cartons so that no fruit is left. What is the biggest possible number of cartons needed?

(xiii) The length, breadth, height of a room are 6 m 80 cm, 5 m 10 cm and 3 m 40 cm respectively. Find the longest tape which can measure the dimensions of the room exactly.

(xv) Mary has a dance class every 2nd day and painting class every 3rd day. On which of the day will she have both the classes?

(xvi) Find a multiple of 70 which is between 200 and 600 which has odd digits at tens and hundreds place.

(xvii) Find a multiple of 120 which lies between 400 and 500 where the digit at tens place is double the digit at hundreds place. 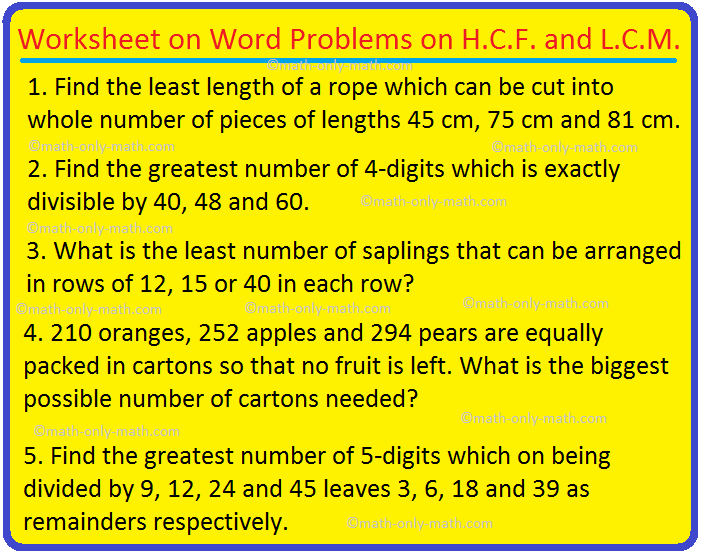 Answers for the worksheet on H.C.F. and L.C.M. are given below.

Relationship between H.C.F. and L.C.M.

Worksheet on word problems on H.C.F. and L.C.M.

From Worksheet on word problems on H.C.F. and L.C.M. to HOME PAGE