What is Polar Co-ordinates? 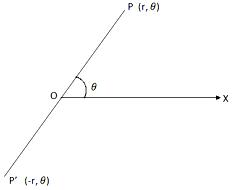 Let OX  be the initial line drawn through the pole O on the plane of reference. Take any point P on the plane and join OP .

By convection, to represent the polar co-ordinate of a point we first write the radius vector (r) and then the vectorial angle (θ) and they are put together in braces putting a comma between them.

(i) for given values of r and θ we shall get one and only one point on the reference plane; conversely, for a given point on the plane r possesses a definite finite value but θ can have infinite number of value (viz ., θ, 2π + θ, 4π + θ,…….etc.).

However, in practice, it is convenient to take both the radius vector (r) and the vectorial angle (θ) as positive.

(iv) Remembering the rules regarding the signs of r and θ we can represent the polar co-ordinate of P in following different ways:

From Polar Co-ordinates to HOME PAGE