Worksheets on Comparison of Numbers

In worksheets on comparison of numbers students can practice the questions for fourth grade to compare numbers. This worksheet contains questions on numbers like to find the greatest number, arranging the numbers etc… .

Questions on Comparison of Numbers:

1. Write the symbol > or < as the case may be, in the blanks provided: 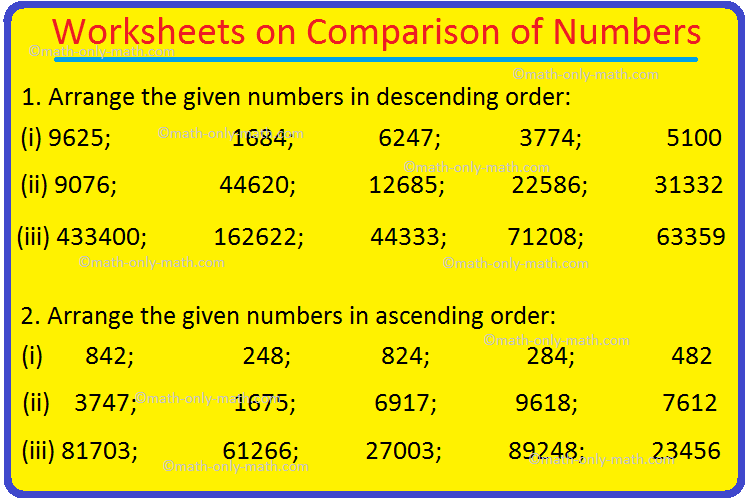 4. Arrange the given numbers in descending order:

6. Arrange the given numbers in ascending order:

8. Compare the numbers and find the greater one:

9. The greatest number among the given numbers is

10. The smallest number among the given numbers is

11. I want to buy a house with least price. Which one should I buy?

12. Given below is the population of 3 states. The least populous state is:

13. Given below is the distance of 3 states from Georgia. The closest state is

If students, parents and teachers have any queries while solving this worksheet on comparison of numbers they can fill-up the comment box  so that we can help them. However, suggestions for further improvement, from all quarters would be greatly appreciated.

From Worksheets on Comparison of Numbers to HOME PAGE