A pyramid is a solid bounded by plane faces ; one of its faces is a polygon of any number of sides and the other faces are triangles whose bases are the sides of the polygon and which meet at a common point outside the plane of the polygon. 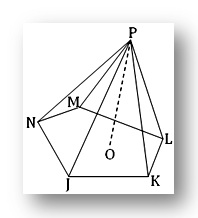 A pyramid has been displayed in given figure. The base of the pyramid is the pentagon JKLMN, its vertex is P; its lateral faces are the plane triangles PJK, PKL etc. and PJ, PK etc. are its edges. If PO be perpendicular to the plane of the base JKLMN then its height is PO. 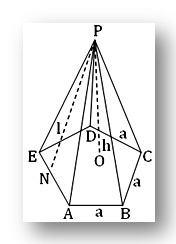 Let a be the length of each side of the base of a right pyramid. If h be the height and 1, the slant height of the right pyramid, then

1. The area of the slant surface of the right pyramid

2. Area of whole surface of the right pyramid = area of its slant surface + i.e. area of its base

From Pyramid to HOME PAGE