In trigonometry we will discuss about the different properties of triangles.

We know any triangle has six parts, the three sides and the three angles are generally called the elements of the triangle.

These six parts are not independent of each other i.e., various relations exist among the six parts.

We will learn how to deduce the relations between the sides and trigonometric ratios of the angles of a triangle.

Let us discuss about some of the properties of triangles. 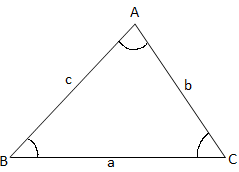 
From Properties of Triangles to HOME PAGE