In 7th grade we will revise and recall, in brief, what we have learnt about fractions and also learn about the multiplication and division of fractions.

A fraction is a number representing a part of a whole. The whole may be a single object or a group of objects.

A fraction is a number representing a part of a whole. A fraction can be expressed in the form a/b, where a, b are whole numbers and b ≠ 0.

Take a piece of paper. Divide in to four equal parts as shown in the given diagram. Shade one part by some color. Now this shaded part is one of four parts. We say here that the shaded part is one-fourth of the total. ‘One-fourth’ is written as 1/4.

In the adjoining diagram, two of three equal parts have been shaded. Thus the shaded portion is two-third (2/3) of the total. 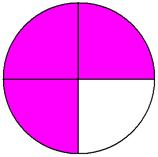 A fraction is quantity which expresses a part of whole. By the fraction ³/₅ we mean---Divide a quantity in to 5 equal parts and then take 3 parts of them.

A fraction when expression by two natural numbers, one above the other, separated by a horizontal line is called a common fraction.

Numerator and Denominator of a Fraction:

In the fraction, the below of the horizontal line is called the denominator. It expresses the number of parts into which a quantity is divided.

The number above the horizontal line is called the numerator. It expresses the number of parts which are taken.

In a fraction a/b we call ‘a ‘as numerator and ‘b’ as denominator.


The fraction representing two parts out of 7 equal parts in which the whole is divided is denoted by ²/₇ and is read as “two-sevenths” . In the fraction ²/₇, 2 is called the numerator and 7 is called the denominator.


In seventh grade fractions we will discuss mainly on these points with examples.

● A fraction whose numerator is lesser than the denominator is called a proper fraction.

● A fraction whose numerator is more than or equal to the denominator is called an improper fraction.

● A combination of a whole number and a proper fraction is called a mixed fraction.

● To get a fraction equivalent to a given fraction, we multiply (or divide) its numerator and denominator by the same non-zero number.

● A fraction is said to be in its lowest terms if its numerator and denominator have no common factor other than 1.

● To compare fractions, we use the following steps:

Step I:  Find the least common multiple (LCM) of the denominators of the given fractions.

Step II:  Convert all fractions to its equivalent fraction with denominator is equal to the least common multiple (LCM) obtained in step 1.

Step I:  Find the least common multiple (LCM) of the denominators of the given fractions.

Step II:  Convert each of the given fractions into an equivalent

● To add (or subtract) fractions, we may use the following steps:

Step I: Obtain the fractions and their denominators.

Step III:  Convert all fractions into an equivalent fraction having its denominator equal to the least common multiple (LCM).

Addition and Subtraction of Fractions

Worksheet on Multiplication of Fractions

Worksheet on Division of Fractions

From Fractions to HOME PAGE