We have learnt, that a collection of objects can be stored out based on their color, shape, size or any other common thing among them. We can organise all the information in a table to understand how many of each item is there in a collection. Information collected is called data.

2. Students of XYZ school, have prepared following details of birds seen in a bird sanctuary.

(i) Which bird was seen the most?

(ii) Which bird was seen the least?

(iii) Which two birds were equal in number?

(iv) How many birds were seen in all?

3. Mr. John has collected details of weather conditions in a month. 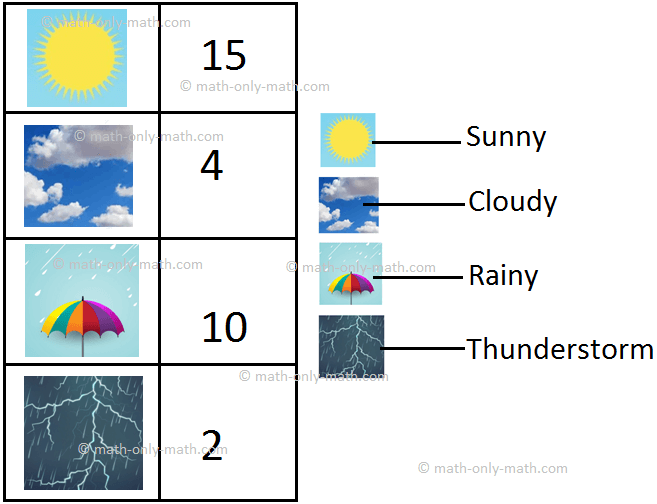 (i) How many sunny days are there in the month?

(ii) How many rainy days are there in the month?

(iii) How many days were having thunderstorm?

(iv) What is the total number of days in the month?

(v) How many more sunny days are there than rainy days in the month?

4. The following table shows the number of students who attends different activities after school.

(i) How many students learn drama?

(ii) How many students learn music?

(iii) How many students in all learn dance and drama?

(iv) Which activity is attended by least number of students?

5. Mr. James has a toy shop. He has recorded the number of various items he sold last week.

(i) How many dolls were sold?

(ii) How many toys were sold in all?

(iii) How many more guns were sold than cars?

(iv) Which toy sold the most?

(v) Which toy sold the least?

6. Prepare a table giving details of number of items you can carrying today in your school bad.

Create a story using the items in the table. You can use the words least, most, more and less in your story. Write your story in the space below. 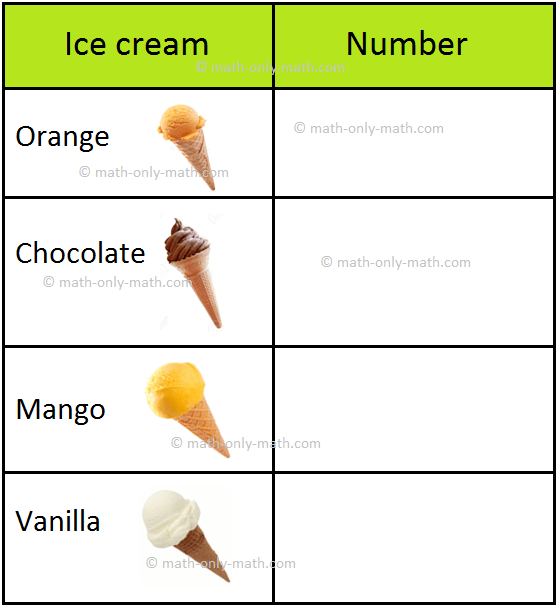 (i) Which flavor had the least sales?

(ii) Which flavor had the most sales?

(iii) How many vanilla ice creams were sold?

(iv) How many more mango ice creams than chocolate ice creams were sold?

From Data Handling to HOME PAGE