Theorem on co-planar are discussed here in detailed explanation with the help of some specific examples.


We are to prove that the straight lines OA, OB, and OC are co-planar.

Therefore, The straight line OA, OB and OC all lie in the XY plane i.e., they are co-planar.

Similarly, it can be shown that any straight line drawn perpendicular to OP at O lie in the XY plane.

Therefore, all straight lines drawn perpendicular to OP at Q are co-planar.

1. Can there be more than three straight lines perpendicular to each other at a point in three dimensional space? Justify your answer. 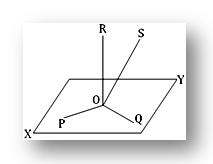 
2. Prove that a point can be found in a plane equidistant from three given point outside the plane. State the exceptional case, if any.


Let g be the given plane and P, Q and R are three given points outside this plane.


Therefore, M is the required point in the plane g.


Evidently, the point M cannot be determined if the line of intersection l of g₁ and g₂ is parallel to the given plane g.

From Theorem on Co-planarto HOME PAGE

Have your say about what you just read! Leave me a comment in the box below. Ask a Question or Answer a Question.
FacebookTwitterPinterestWhatsAppMessenger
[?]Subscribe To This Site