Theorem of three perpendiculars is explained herewith some specific examples. 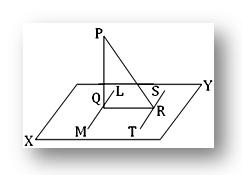 Construction: Through Q draw in the plane XY the straight line LM parallel to ST. 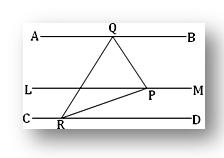 Construction: Draw a plane PQR perpendicular to LM and let us assume that the drawn plane cuts LM, AB and CD at P, Q and R respectively.

2. Prove that the quadrilateral formed by joining the middle points of the adjacent sides of a skew quadrilateral is a co-planar parallelogram.


Let W, X, Y and Z be the mid-points of the sides AB, BC, CD and DA of a skew quadrilateral ABCD. We are to prove that, the quadrilateral WXYZ is a co-planar parallelogram. 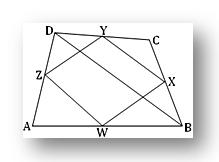 Similarly, WX and ZY are parallel to each other and therefore, there is a plane passing through WX and ZY. Both the planes through ZW and YX and through WX and ZY pass through four points W, X, Y and Z. Therefore, it is evident that the two planes must be the same. Hence, the quadrilateral WXYZ is co-planar. Again, ZW is parallel to YX and ZW = YX. Therefore, the quadrilateral WXYZ is a parallelogram.

From Theorem of Three Perpendiculars to HOME PAGE

Have your say about what you just read! Leave me a comment in the box below. Ask a Question or Answer a Question.
FacebookTwitterPinterestWhatsAppMessenger
[?]Subscribe To This Site