Standard Equation of a Parabola

We will discuss about the standard equation of a parabola.

⇒ A lies on the parabola

If this line SK intersects the parabola at A then SK is the axis and A is the vertex of the parabola. Draw the straight line AY through A perpendicular to the axis. Now, we choose the origin of co-ordinates at A and x and y-axis along AS and AY respectively. 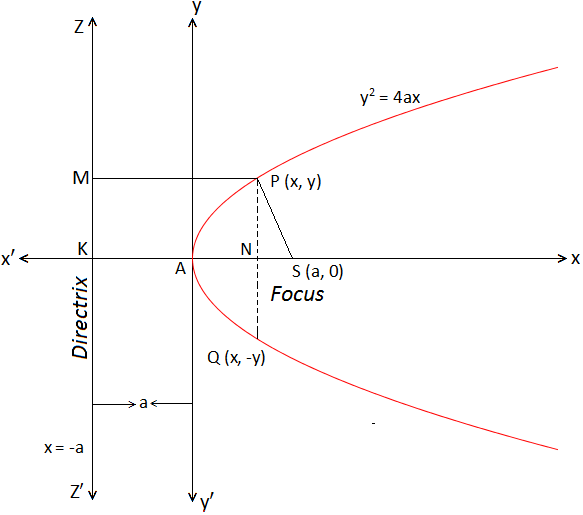 Standard Equation of a Parabola

Let P (x, y) be any point on the required parabola. Join SP and draw PM and PN perpendicular to the directrix ZZ' and x-axis. Then,

(i) The parabola has two real foci situated on its axis one of which is the focus S and the other lies at infinity. The corresponding directrix is also at infinity.

(vii) The line segment PQ is the double ordinate of P and PQ = 2y.

Again, if x is positive and gradually increases then y also increases and for each positive value of x we get two values of y which are equal and opposite in signs. Therefore, the curve extends to infinity on the right of the y-axis.

From Standard Equation of a Parabola to HOME PAGE