Definition of in Line-segment, ray and line geometry:

The part of a line is called a line-segment as shown below.

Ray: We know about sun-rays. A sun-ray starts from the sun and goes on a direction up to endless space. Similarly a geometrical ray is considered a special kind of line which starts from a fixed point and goes to any distance to the other direction of the starting point.

A line, line segment and ray all are called one dimensional (1-D) figures as they have only length.

In short, a ray is a portion of line. It has one end point. A ray can be extended in any one direction endlessly. We name the given ray as \(\underset{AB}{\rightarrow}\). The first letter shows the end point. The Sun light is an example of the ray.

Distinction between line-segment, ray and line: 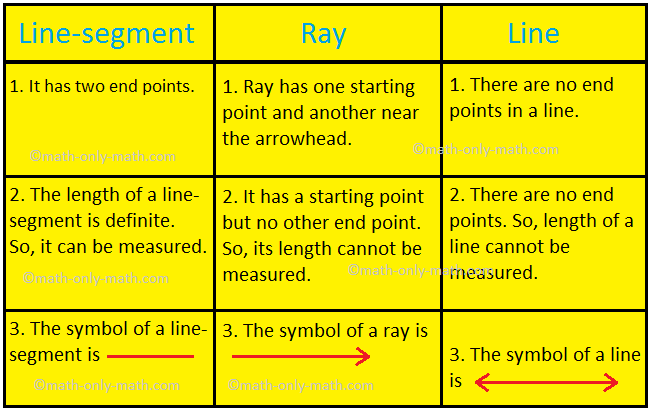 These explanations on line-segment, ray and line will help the kids to understand the different fundamental element of geometry and their distinction.

● Surfaces of the Solids

From Line-Segment Ray and Line to HOME PAGE