We will discuss here about coins and currency notes. In our daily life we purchase things from the shop and pay money to the shopkeeper. We are already aware of the following coins and notes. Coins of 1 paise, 2 paise, 5 paise are not available and that of 10 paise, 20 paise, 25 paise, 50 paise are less in circulation. Notes of Re 1 and Rs 2 are also less in circulation. 1 rupee is equal to 100 paise. We write p for paise. p is written after the amount.

Rupee is a larger unit of money than paise.

We use ‘Re’ to write rupee.

We use ‘Rs’ to write rupees.

We use dot (.) to separate rupees and paise.

Figure on the left of the dot represents rupees.

Figure on the right of the dot represents paise.

Number of paise is written as 2-digit number.

(i) If the amount of money consists of paise only we put zero before the dot (.) to indicate that there are no rupees. For example, 75 paise is written in figures as Re 0.75 or 75 p.

(ii) If the number of paise has one digit, we put zero before it to make a two digit number. For example, 5 paise in figure is written as Re 0.05 or 5 p.

We must know that:

We express Rs 73.25 as rupees seventy-three and twenty five paise.

We express rupees sixty and five paise as Rs 60.05

3. Express the money in the symbolic form 25 rupees and 75 paise.

Questions and Answers on Coins and Currency Notes:

I. Count and write, how much amount do the notes and coins make? 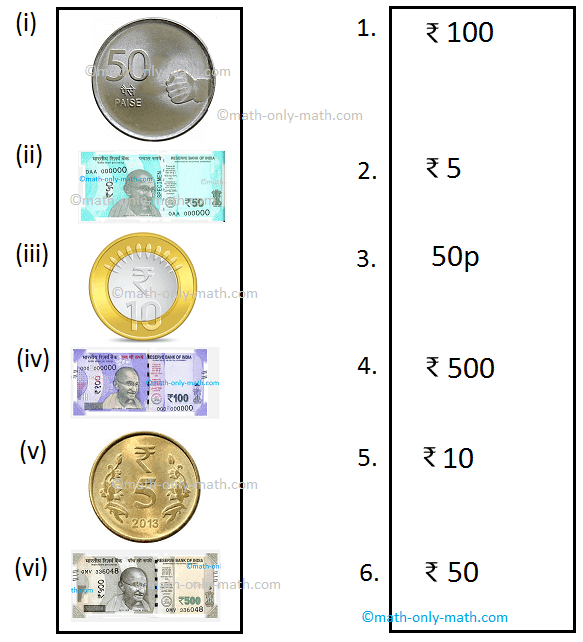 III. Read the tag on each item. Circle the coins or rupees you need to buy them. 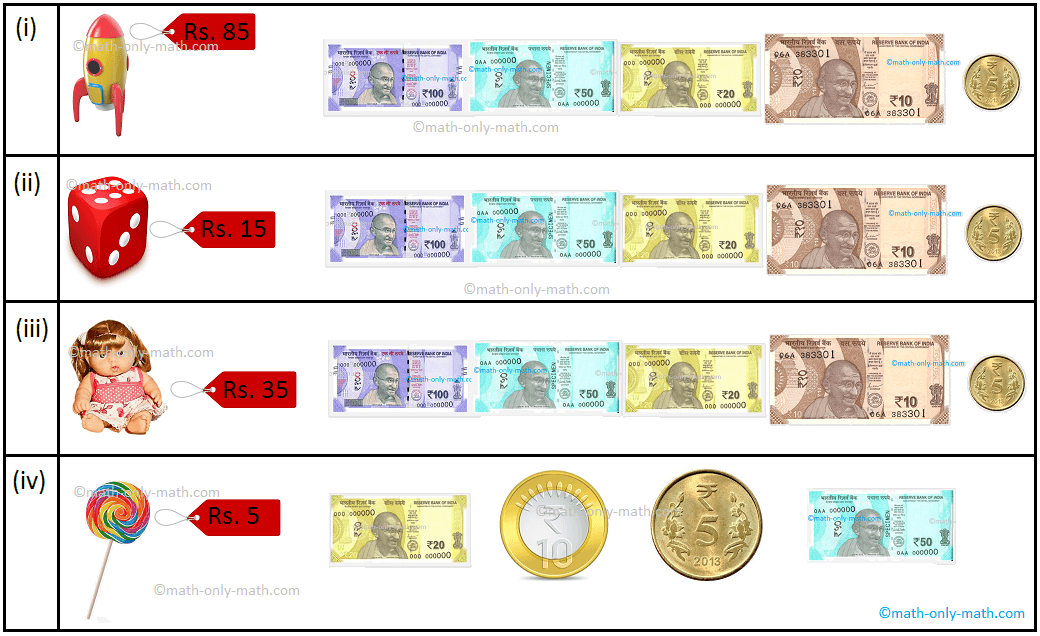 We can get same amount of money by combining different notes and coins. For example 2 coins of Rs. 10 each can be used in place of Rs 20.

IV. Using least number of coins make the given amount. One has been done for you.

V. Using least number of notes make the given amount.

Writing Money in Words and Figure

From Coins and Currency Notes to HOME PAGE