The activity provided in the third grade math worksheet on subtraction word problems is very important for the kids. Students need to read the questions carefully and then translate the information to solve the subtraction problem and find the answers of each word problems. The sheet provides large collection of word problems using subtraction for the kids to practice and test their knowledge.

2. A basket hold 55 oranges. The shopkeeper has 65 oranges. How many oranges can not be put in the basket?

4. Ron has 1846 marbles in his collection; he gave 547 marbles to his sister. How many marbles are left with him then?

7. There were 473 students in class V of a school. Out of them 461 passed and were promoted to the next class. How many students did not get promoted?

11. Adriana has 346 apples in the garden. She gave a few apples to her friend. 135 apples were left with her. How many apples did she give to her friend?

17. During a Vaccination program in the village, out of 13567 children 13026 were vaccinated. How many children are still to be vaccinated?

19. Derek needs to cover a distance of 1456 km to reach his home town and if he covers 1152 km by train and rest by bus. How much distance does he cover by bus?

25. Sandy scored 785 points in a game on Saturday. He lost 213 points on Sunday. How many points were left with him?

26. Brad could solve 483 questions out of 500. How many questions were left unsolved?

27. Rosy made 452 dark chocolates and 183 vanilla chocolates. Which flavor is less and how many more chocolates are required to make both chocolates equal?

Answers for worksheet on subtraction word problems are given below to check the exact answers of the above questions using subtraction. 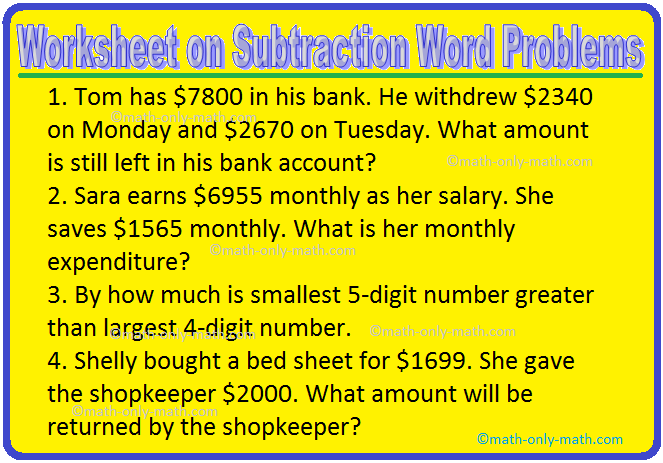 From Worksheet on Subtraction Word Problems to HOME PAGE