The use of integers is used to express our day-to-day situations in Mathematical terms.

(i) If profit are represented by positive integer then losses by negative integers.

(iii) If rise in price is represented by positive integers, then fall in price by negative integers and so on.

Similarly, if a depth of 37 below sea level is represented by -37; then +37 represents a height of 37 above sea level and so on.

Use of integers as directed numbers:

When numbers represent direction, then numbers are called directed numbers.

-10 represents moving 10 m towards South, opposite direction of North. 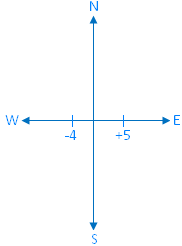 Write the opposite of the following expressions:

From Use of Integers to HOME PAGE