Something mentally interesting in addition and subtraction:

1. There is a square 3 × 3 division. The numbers from 1 to 8 are filled in the divisions in such a way that the sum of the three numbers in each line (vertically, horizontally and diagonally) is 15. This square is called Magic Square of numbers 1 to 8 with sum 15. 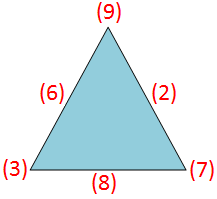 2. There is a triangle having three sides equal. Six numbers are placed at its corners and at the middle of each side separately. The sum of three numbers of each side is the same. Such a triangle is called magic triangle.

Complete the following magic triangle to place the proper numbers at the proper places:

3. Read the following sentences. The result of each is same.

(ii) What will be the result after subtracting 3 from 5?

(iv) What is the difference between 5 and 3? The result is the same.

Is the result same for the following questions? If yes, then what is the result?

(iii) Out of 45 students of a class 7 students failed. How many students passed?

5. On a square field, there are three open rooms at its four sides. Three cows are placed in each side-room. In each side of the square there are 9 cows in count. But the total number of cows is 24.

Four more cows come. Arrangement of putting the cows is so changed that the number of cows in each side of the square field remains the same, i.e., 9 cows as shown. But the total number of cows become 24 + 4 = 28

The next day eight out of 28 cows are removed and arrangement is re-changed in such a that the number of cows in each side remains the same, i.e. 9 and total number of cows now become 20.

Answers for the worksheet on mental math addition and subtraction are given below to check whether you get the exact answers when you use the tricky strategies to add and subtract mentally. 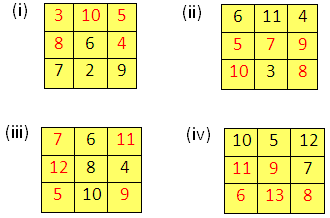 From Worksheet on Mental Math Addition and Subtraction to HOME PAGE