The following table shows the formation of two digits numbers: 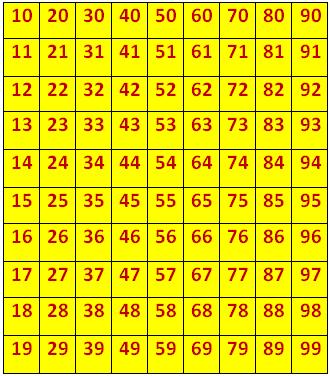 Sophia has 99 beads. She uses 10 beads to make 1 garland. She has made 9 garlands and now she is left with 9 beads.

She gets 1 more beads from her mother. She is now able to make another garland of 10 beads.

The total number of beads now 100.

Ninety-nine and one more make one hundred.

Count and write the number and number name.

It is easier to count larger numbers by making groups of hundreds.

Count and write the number and number names.

The three digits numbers may easily be explained with the help of mathematical apparatus called ABACUS.

What is spike abacus?

Spike abacus has many iron spikes on a wooden base. The spikes may have globules having wholes. The spikes are named as ones, tens, hundreds, thousands etc. respectively from extreme right to the left.

The number of globules in the concerned spikes expresses the place value of the digit of the number. 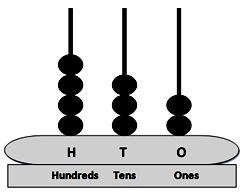 In the given picture of the abacus, there are three spikes. In the first spike expressing ones, there are 2 globules, next to it there are 3 globules and in the third spike from the ones’ spike there are 4 globules.

Thus, with the help of ‘abacus’ we can understand the concept of three digit numbers.

● A number has one or more than one digit.

● To read a two-digits number, first read the tens place and then read the ones place.

● To read a three digits number, first read the hundreds place, then read the last two digits as shown below.

III. Fill in the blanks:

IV. Write the short forms. One has been done for you.

V. Write in the expanded forms. One has been done for you.

VI. Fill in the blanks: