We will discuss here how to use Tally marks.

We know that data is a collection of information. When the data is large, it may not be easy to count. So, we make use of tally marks. Tally marks is the quick way of recording the given data by grouping in bunches of five. The first four tallies are marked vertically and the 5th tally in a bunch is marked diagonally across the four tallies.

To count the number of times a value of the variable appears in a collection of data, we use tally mark ( / ). Thus tally mark represents frequency.

The first four tallies are marked vertically and the 5th tally in a bunch is marked diagonally across the previous 4 as shown below:

Observe the tally marks and the corresponding frequencies:

(i) Write the tally marks for a frequency of 22.

(ii) What is the frequency corresponding to the tally marks 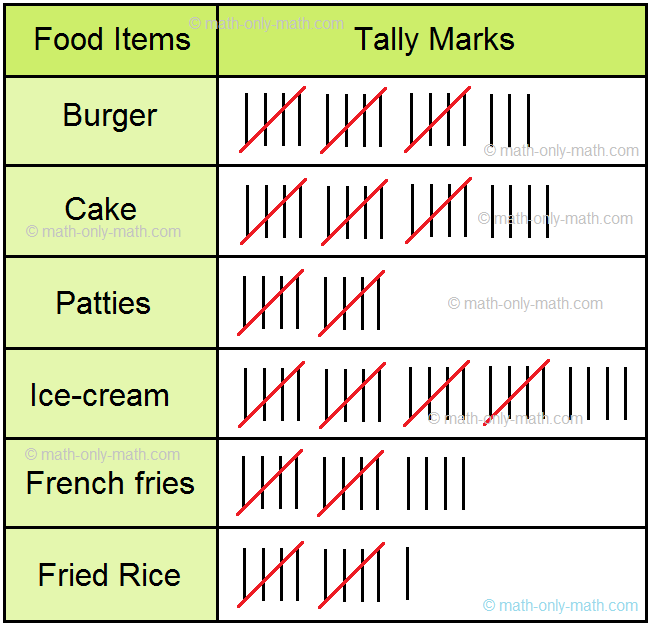 Observe the above table and answer the following questions:

1. Which item was sold maximum and how many were sold?

2. How many French Fries were sold over the weekend?

3. Which item was the least selling item?

4. How many more Burgers were sold than Fried Rice?

5. How many items were sold in all?

1. The weights (in kg) of the teachers of s school are recorded as shown below.

2. The weights (in kg) of the teachers of s school are recorded as shown below.

Questions and Answers on Tally Marks:

When the observations are large, it may not be easy to interpret the data by simply counting, so we make the use of bass (|, \) called the tally marks.

Tally marks is the quick and easiest way of counting objects from the given data by grouping in bunches of five.

One vertical line (|) is made for each of the first four numbers and a diagonal line (\) across the previous four marks to represent the fifth number.

1. Write the numbers for the given tally marks. 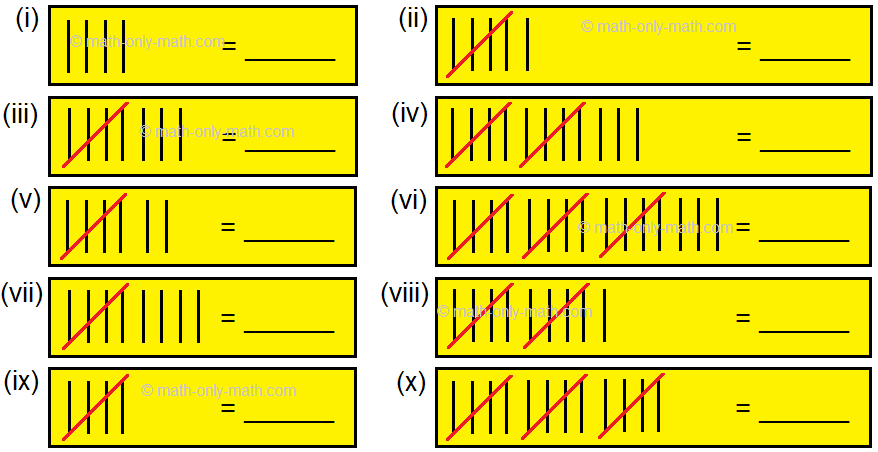 2. The tally chart below shows different colors of cars that passed the school gate in five minutes. How many blue cars did pass? 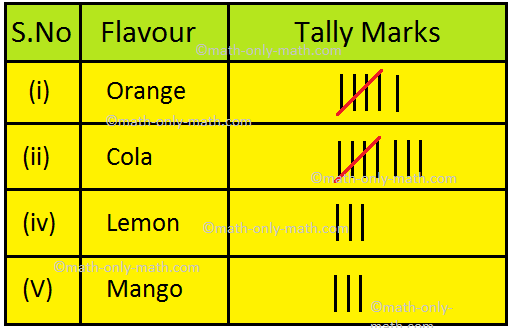 4. Aaron tossed a dice 30 times, with the following results:

How many fives did he get?

6. Observe the given chart. It shows the different types of shapes used by the students to decorate the class board. Represent the data using a tally chart. 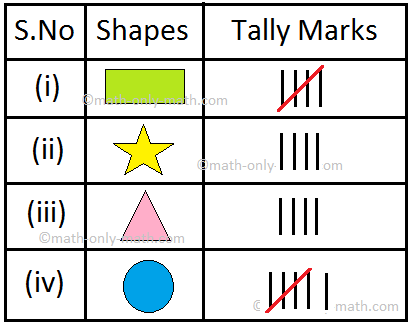 7. 40 children of grade III voted for the monitor of class. On counting the votes the following results were obtained. Put tally mark for each vote in the given table.

Fill in the table: 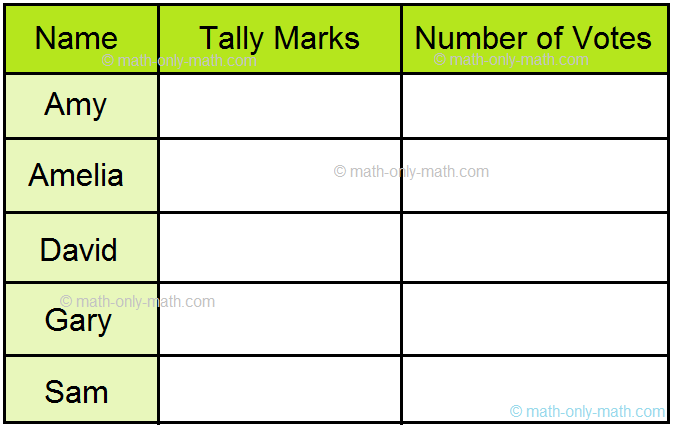 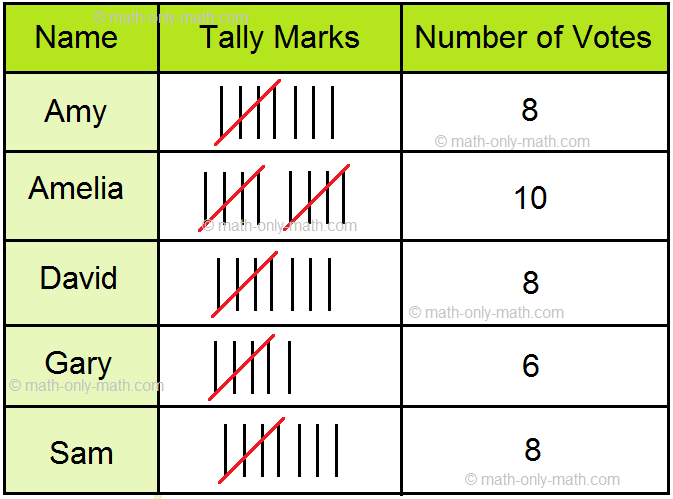 (i) Who was elected as a monitor?

(ii) How many votes did the monitor get?

(iii) Who got the least number of votes?

(iv) Who all got the same number of votes? 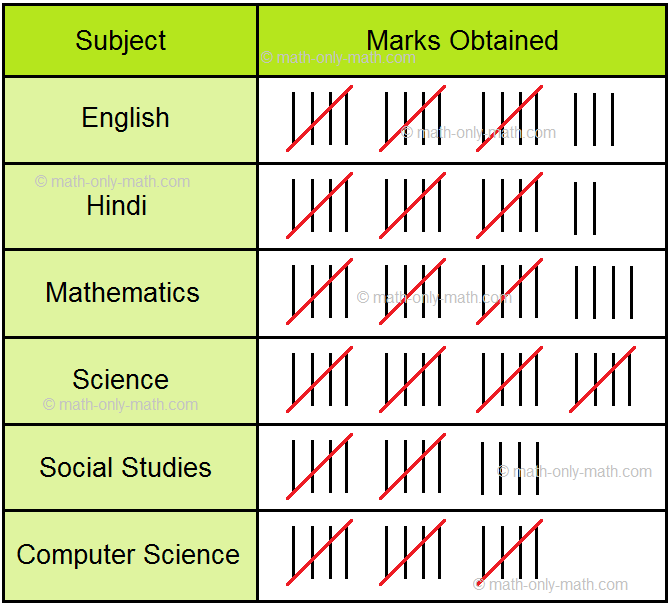 (i) In which subject did he score maximum marks?

(ii) In which subject did he score minimum marks?

(iii) In how many subjects did he score less than 15 marks?

(iii) In how many subjects did he score full marks?

9. The number of members in 30 families of a society is as follows. 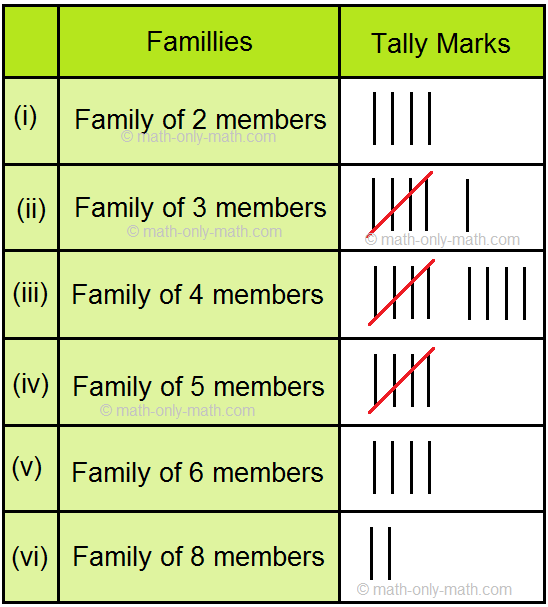 10. The following pictograph shows the number of trees planted in a week by Sarah.

Number of Trees Planted in a Week 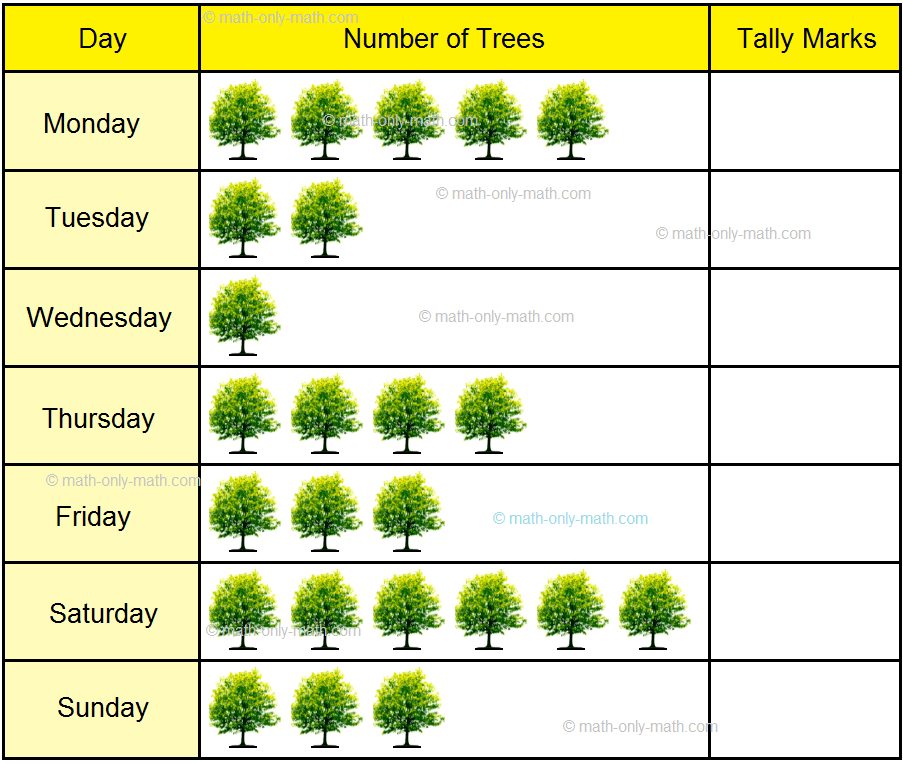 (i) On which days, equal number of trees were planted?

(ii) On which day did Sarah plant maximum number of trees?

(iii) On which day did Sarah plant 4 trees?

(iv) Find the total number of trees planted in a week.

(v) Express the total number of trees planted on each day using tally marks in the given column.

(i) Friday and Sunday 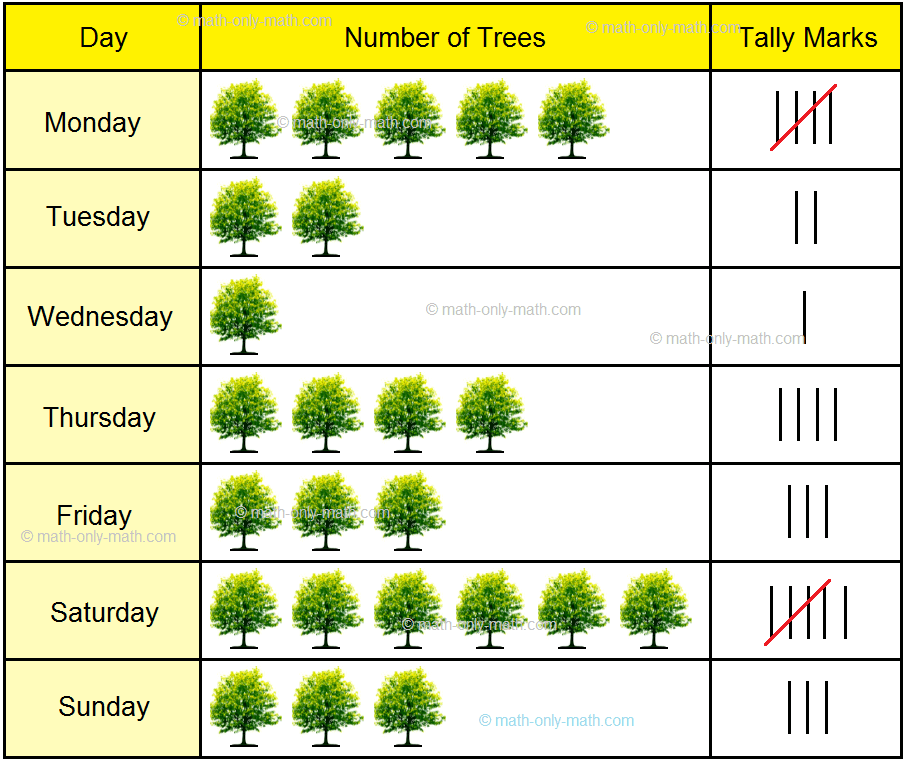 11. Nairitee and her friend bought some sandwiches, cupcakes and candies. 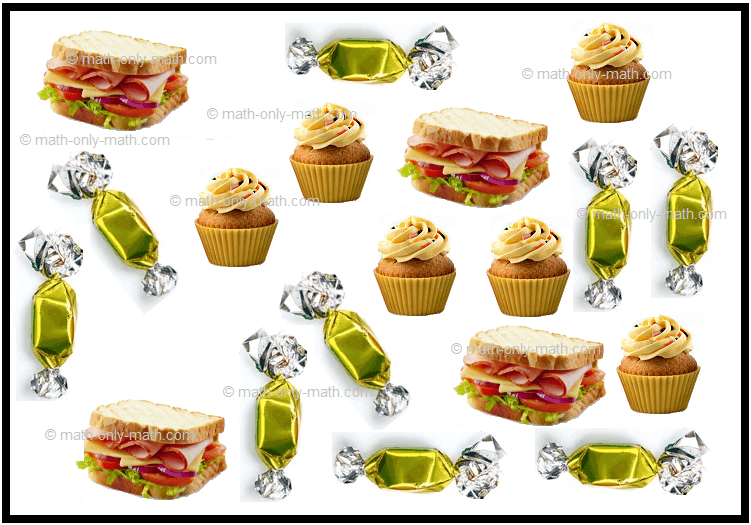 Draw tally marks to show the number of items in each kind and answer the questions. 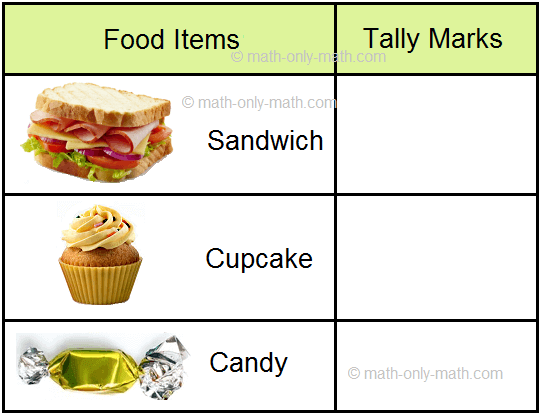 (i) Which item is least in numbers?

(ii) How many more candies did they buy than cupcakes?

(iii) Which item counts more than 8?

(iv) How many items are there in all? 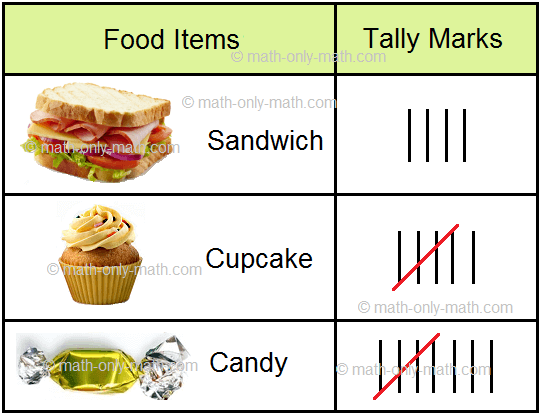 12. Given below is the average sleeping hours in a day of some animals. Observe the given table and fill in the blanks. 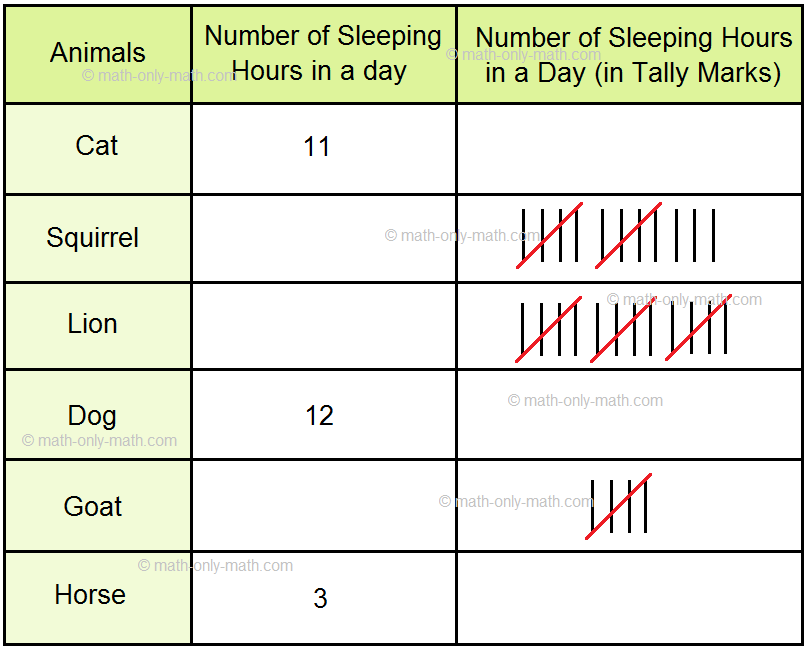 Now, observe the table and answer the following questions.

(i) Which animal sleeps maximum number of hours?

(ii) Name the animals which sleeps less than 12 hours in a day.

(iv) If the given data is represented pictorially, write the title and key for the same. 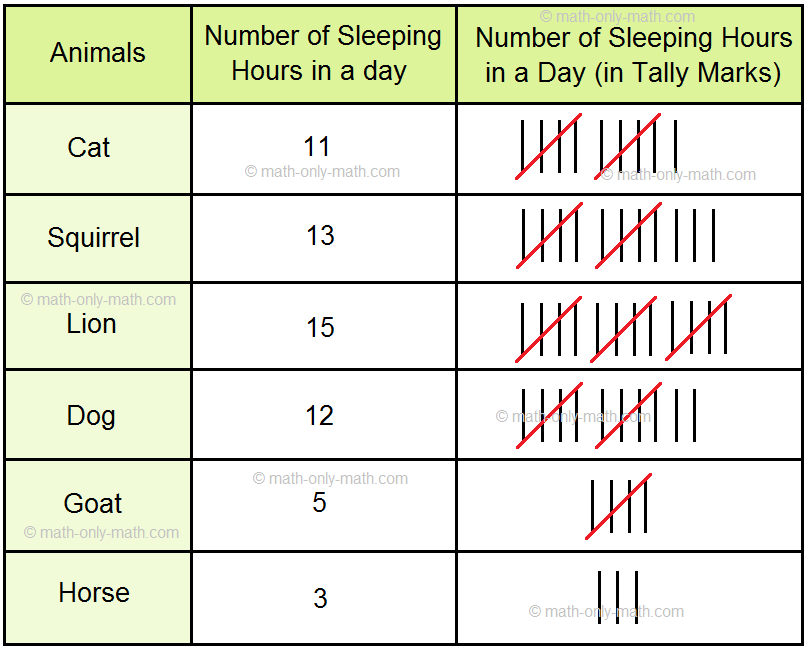 The above examples will help us to understand tally marks.

From Tally Marks to HOME PAGE