We will learn Patterns in Square Numbers.

Let us consider the following series of numbers.

If we represent each number of above series by a dot and arrange them in such a way that they make a square. Such numbers are known as square numbers.

Square numbers can be obtained by multiplying a number by itself.

Questions and Answers on Patterns in Square Numbers:

I. Observe the pattern and find the next square number by drawing and counting dots in the box. 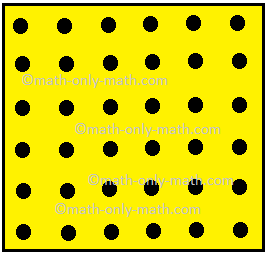 II. Complete the given pattern: