We will discuss here about the metric measures of length, mass and capacity.

Measurements of length, mass and capacity:

Let us revise them.

Length is measured in kilometre, metre and centimetre.

Mass is measured in kilogram and gram.

Capacity is measured in litre and millilitre.

In metric system, we represent thousands by kilo, hundreds by hector, tens by deca, tenths by deci, hundredths by centi and thousandths by milli. This system is decimal since each unit is 10 times the next smaller unit.

This is decimal system based on the multiples of 10.

We can understand the metric system more clearly through the following table of metric measures.

Measurement of length, mass and capacity tables can be represented in the form of a place-value chart as shown below. 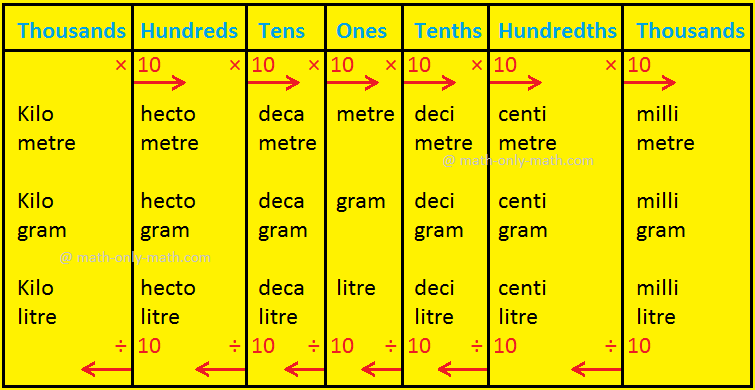 From the above table of metric system we come to know that:

These are the bigger units of metric system

These are the smaller units of metric system

Questions and Answers on Metric Measures:

XI. Fill in the blanks:

From Metric Measures to HOME PAGE