Estimation in Operations on Numbers

To estimate sum and difference, we first round off each number to the nearest tens, hundreds, thousands or millions and then apply the required mathematical operation.

Solved example on Estimation in Operations on Numbers:

To find the estimated product or quotient, we round off numbers to the greatest place-value.

2. Find the actual and estimated product of 22,165 and 3,745 by rounding off numbers to the greatest place-value.

7,475 is rounded off to the nearest thousands

510 is rounded off to the nearest hundreds 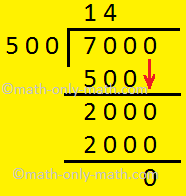 Questions and Answers on Estimation in Operations on Numbers:

I. Estimate the given numbers and find the answer:

1. A shopkeeper has 93,450 packets to sketch pens. If each packet has 12 pens, then how many sketch pens are there in the shop.

3. There are 1341 houses in a street. Each house uses 278 units of electricity energy. Estimated energy used by the houses nearest to 10 will be

From Estimation in Operations on Numbers to HOME PAGE