Solve the questions given in the worksheet on decimal word problems at your own space. This worksheet provides a mixture of questions on decimals involving order of operations i.e., addition, subtraction, multiplication and division.

7. The annual rainfall received by Arunachal Pradesh is 278.2 cm and that by Assam is 281.8 cm. Who received less rainfall?

9. The milkman delivers 5.02 liter of milk to a house in the morning and 2.120 liter in the evening. What is the total quantity of milk delivered by the milkman?

20. David has a jug full of milk. He pours the complete milk in 4 glasses, each glass of capacity 0.8 l. How much milk was there in the jug?

Answers for the worksheet on decimal word problems are given below to check the exact answer of the above problems. 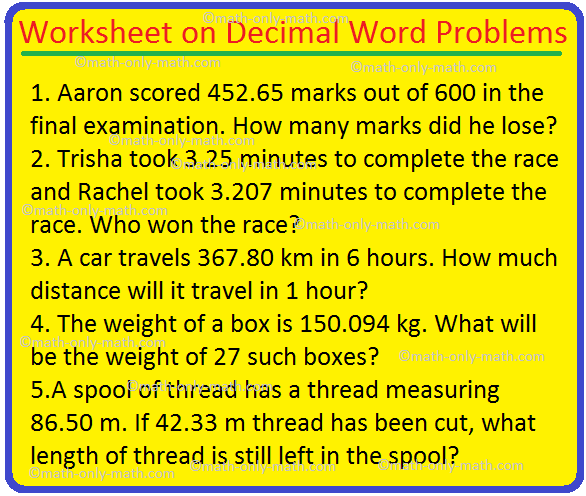 
From Worksheet on Decimal Word Problems to HOME PAGE