Fraction as a Part of a Whole

How is fraction as a part of a whole?

We know, a fraction means a part. So, fraction is the part of a whole object.

Thus, a fraction is the part of a collection or collections of objects.

Thus, a number which is not a whole number is known as a fractional number.

Pictures of fraction as a part of a whole: 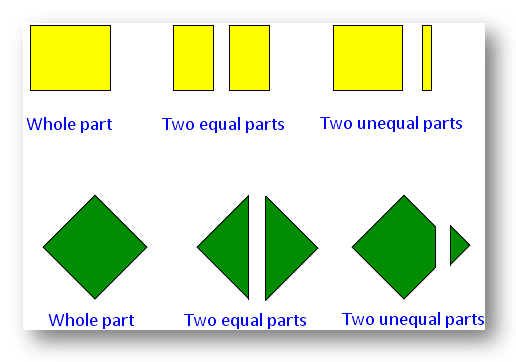 1. When an object as a whole is divided into two parts, there are two possibilities. The parts may be equal or unequal.

Each equal part of a whole is called one-half. It is expressed as 1/2 and read as one over two or one upon two.

If a colorful sheet of paper is taken and one edge is brought on to the opposite edge and a crease is made in the middle, then this crease divides the sheet of paper into two equal parts. Each part will be one half of the whole sheet.

2. Again if we take a sheet which was earlier divided into two equal parts by folding, it can again be divided by a second fold in the middle.

If we consider two parts of the four equal parts of a whole it will represent 2/4 or two fourths, i.e. two one-fourth or half.

If we consider three parts of the four equal parts of a whole, it will represent 3/4 or three-fourths or three quarters. It is also read as three upon four.

3. If a sheet is divided into three equal parts, then each part is called one-third of the whole sheet.

4. How can we fairly share one apple between two children? How much will each child get? Let us cut the apple in three different ways.

We say one whole is divide into 5 equal parts from which if 4 parts are taken, it may be expressed as 4/5 which is a fractional number or fraction.

The above explanation will help us to understand how the fraction as a part of a whole number.

● Fraction as a Part of Collection

● Convert a Fraction to an Equivalent Fraction

From Fraction as a Part of a Whole to HOME PAGE